Since Eskolta’s founding, we have worked extensively with the New York City Department of Education to understand the impact of City initiatives and policies on educators in the City. Our research study on a citywide initiative to increase teacher leadership opportunities offers an example of Eskolta’s research work focused on understanding how district policy rollout affects educators and can be improved. It also provides a window into the state of teacher leadership in the largest school district in America.

In the 2014–15 school year, Eskolta was commissioned by the NYCDOE’s Office of Teacher Recruitment and Quality to conduct a study on the development and impact of teacher leadership opportunities across the City. One hundred seventy-eight principals, 641 teacher leaders, and 3,922 teachers across 392 schools participated in the study, providing a broad sample. Participants responded to a survey soliciting information on the level of collaboration between teachers and leadership at their school, the use of the Danielson Framework and its impacts on their teaching, and their satisfaction with and commitment to teaching. This study resulted in four policy briefs, each highlighting one major insight from the data that was collected. 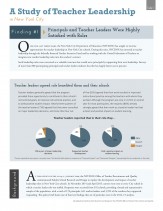