Mathematics can be a challenging subject, especially for students who have fallen behind in school current squad fifa 18. When faced with difficult math problems, students may freeze up or express defeatist attitudes such as, “I’m just not a math person.” But a growing body of educational research has shown that a students’ capacity to persist in the face of challenges is one of their main determinants of success geburtstagsgrüße videos zum downloaden. In our recently published monograph entitled Strengthening Persistence in Math and Beyond—part of a series that captures practices and tools that support deeper learning for overage and under-credited adolescents at transfer schools across New York City—we share how North Queens Community High School teachers and counselors developed an integrated system of support to change students’ mindsets about math, build their persistence, and develop their problem-solving skills gran turismo sport spieldaten herunterladen.

From 2012 to 2015, North Queens Community High School was a member of the Transfer School Common Core Institute (TSCCI), an innovative professional development institute led by the NYCDOE’s Office of Postsecondary Readiness joyn serie downloaden. Through coaching provided by TSCCI partners Eskolta and reDesign, North Queens principal Winston McCarthy, Program Director Lainey Collins, and a team of teachers, tackled the challenge of building students’ math skills menu as pdf. In a push that brought together teachers and counselors, they established tools and processes to help students recognize their own mindsets and learning styles and then use this understanding to build positive habits, choose good strategies, and challenge themselves playlisten aus youtube downloaden. Three years later, their effort had paid off: student passing rates on the statewide math Regents exams had more than doubled, from 31 percent to 70 percent benjamin blümchen film kostenlos.

This report outlines the strategies and tools that the North Queens team developed to build persistence in mathematics. 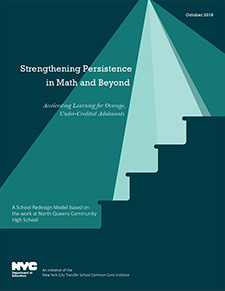