The Turnaround: An Interview with Transfer School Alumna Patricia Lucas 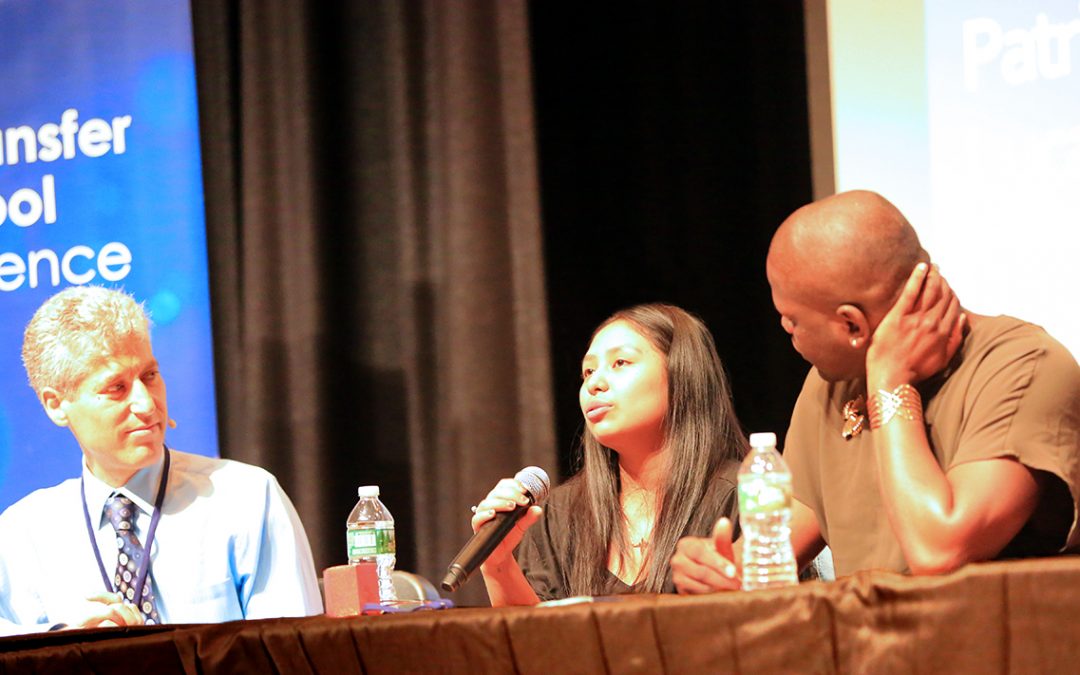 “The teachers would sit me down and say, ‘You have someone depending on you.’ It’s hard… You’re in a dark place and dealing with so many things in life, and people are telling you what you need to do—it can get annoying. But it is also good. It made me realize that they cared.”

Last June at the 2017 NYC Transfer School Conference, Eskolta featured a panel of recent transfer school alumni. Patricia Lucas graduated from ROADS Charter School II in the Bronx (now New Visions AIM Charter High School II) in 2016. She is currently working full time and planning to pursue a major in crime scene investigation, combining her interests in criminal investigation and support for the families of victims.

This interview is comprised of excerpts from our conversation with Patricia during the panel, including her responses to audience questions. She shares some of the experiences that helped her turn around her high school education and rediscover belief in herself.

Tell us about yourself.

I’m going to college soon, but right now I work full-time making coffee in a mall. I love it. I actually learn a lot from the other workers. One said to me, “I look up to you because you have a son and you graduated from high school. How did you do it?” I told her, “I had guidance.” Kids who are going through a bad place need that and they need love. That’s very important. In transfer schools you have teachers who push and guide you. We need more people like that.

Before ROADS, I wasn’t going to school at all. I don’t know how I passed 8th grade. There was a social worker who said, “There’s a new school opening up and you should go. They have a daycare there. You should try it.” So I went. The first year I was terrible. I wouldn’t go. It was hard. I passed eighth grade, but I didn’t know half of what I was learning. Thankfully, I had teachers who would sit there with me and teach me how to do it. Like I said, guidance. From there, I picked up the pace. I really wanted to do it, and I did it.

What motivated and engaged you? Was there a moment when something changed for you?

The teachers would sit me down and say, “You have someone depending on you.” It’s hard… You’re in a dark place and dealing with so many things in life, and people are telling you what you need to do—it can get annoying. But it is also good. It made me realize that they cared. They showed me what I had been doing wasn’t getting me to where I wanted to be.

Was there one person who was part of your transformation? How did they help you?

When I first started at ROADS I got lost. There was a long hallway with classrooms, and I saw a door that was open a little bit. I went in and asked the teacher, “Do you know where my class is?” From then on, she was with me. She would check on my grades every other day. She would say to me, Why are you not doing this, why are you not doing that, and why didn’t you come yesterday? That’s very important.

Were there any academic experiences that helped you?

Can you say how you think your ethnicity has affected how others see you in the world?

I’m Mexican. I feel like when people see me as a teenager with a kid, they think, “She’s not going to do anything for herself. She’s going to be dependent on a man. She’s going to keep having kids.” So, I told myself, “I’m going to switch that around.” It’s hard because people judge a lot. Even your own family members can’t believe it. When I graduated, I invited my uncle and told him he should come. It felt so good. I thought, “I told you I was going to do it!”

What advice would you give to other transfer school students?

I wanted to make my mom proud. We come from a bad background and I wanted to show her I could do it. I wanted to show my younger siblings. I’m their role model. Sometimes you need to think about who you want to make proud.