As with any institution, tackling the complex systems of inequity in our schools is no small task.  It requires deep commitment, planning, and most critically, the voices, ideas, and perspectives of the whole school community—especially those of students and their families.

Several years into this work, leadership at MS/JHS 118 William W. Niles, a middle school in the Central Bronx serving students in grades six through eight, reached out to Eskolta to take their next step in this challenge. The school is divided into three academies: Academy of Excellence, Spectrum Academy, and Pace Academy. Historically, Pace Academy is a screened program, admitting students based on their elementary school performance and other factors. Recognizing inequities were further exacerbated by the division of the three academies, the principal of MS 118 partnered with Eskolta to develop a stakeholder-engaged three year strategic plan for school improvement guided by the New York State Culturally Responsive and Sustaining Education (CRSE) framework.

Eskolta Senior Consultant Jennifer Ostrow began by leading a baseline assessment of the school using the CRSE Framework, available data on the school’s performance, and empathy interviews conducted with faculty, students, and parents. Next, Eskolta staff held multiple introductory CRSE workshops for faculty, students, parents, and paraprofessionals. Parents and students discussed elements of CRSE that they found within the school and aspects they thought could be improved. Teachers looked at the CRSE framework in more detail and the implications it could have on their practice. Eskolta then facilitated sessions between students and teachers to come up with ideas that they could implement that would address the areas in need of improvement. The same was done with parents, paraprofessionals, and school aides. Finally, school leadership voted on the proposals and created goals.

Among other things, the baseline assessment showed that it would be beneficial for the school to involve students as co-creators of the curriculum. Eskolta formed two groups of teachers to use continuous improvement to tackle this issue. Over several months, the teachers piloted different ideas for collaborating with students on curricular development and were enthusiastic about the results. At the end of the year, each team presented their experiences to the whole faculty, who responded with great enthusiasm—so much that copies of their planning and guidance tools ran out during the meeting. “Teachers got some evidence that it really could work,” said Ostrow.

But this first year was just the first step. Using the strategic plan developed through these collaborations, the MS 118 team plans to expand their work by forming four continuous improvement groups, each to take on a different goal. “It’s really exciting to see a school involve students so deeply in strategic planning,” said Ostrow. “I think this could be a great model for schools across the country who are interested in authentically engaging stakeholders in decision making and bringing coherence to their planning.” 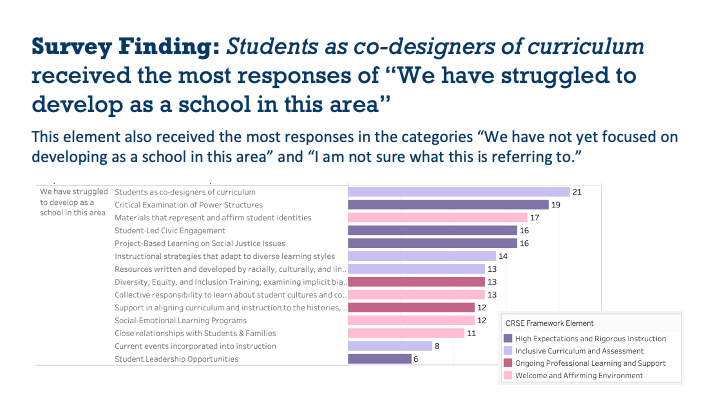 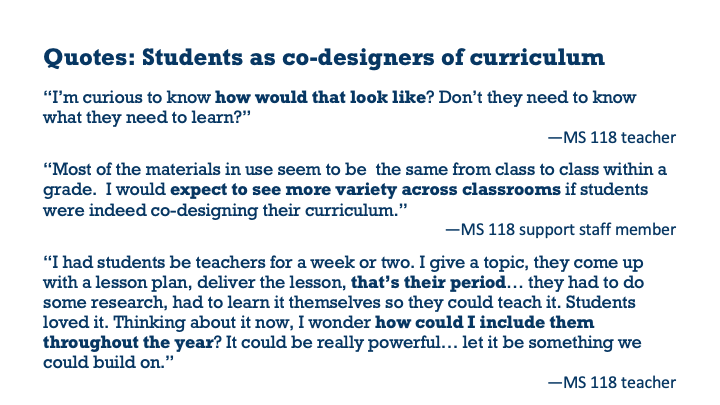